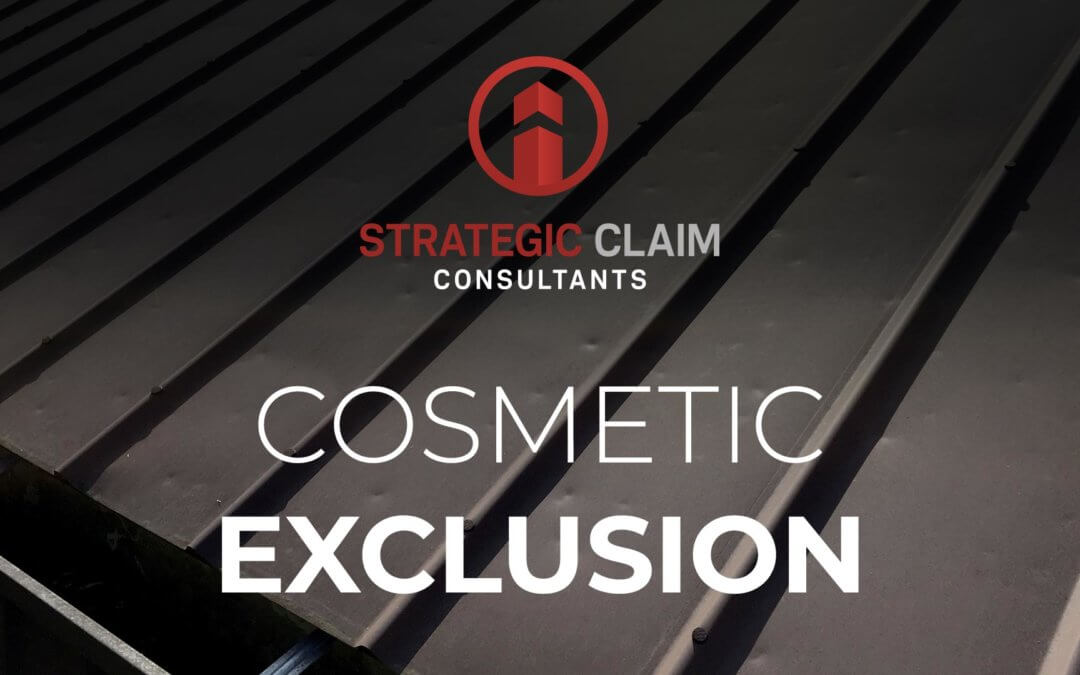 Imagine this. You just purchased a new family home and during one of those random thunderstorms, the brand new roof became damaged from hail. After following all the steps in the claims process, you come to find out that the insurance company has denied your claim due to cosmetic exclusion. That would be some seriously concerning news to a new homeowner who thought they were fully covered under their comprehensive policy. SCC is here to make sure that this doesn’t happen to you. What is cosmetic exclusion? – When an insurance company withholds funds from the insured because of the grey area of if the property is damaged or if the damage is just cosmetic. Some insurance policies have this specific clause written within the policy that can restrict the insured’s coverage for their property. This is a way for the insurance company to limit the coverage for nonfunctional damage.

In the case of our hypothetical damaged roof, the question is raised if the roof is damaged to where it is no longer functional. If it is still functional, this is where the insurance company may claim a cosmetic exclusion, thus releasing their responsibility to cover the insured’s claim. It is the job of a public adjuster to represent their client’s needs and make sure they are being treated fairly in the claims process.

What did we learn from the 2016 San Antonio, Texas hailstorm?

The hailstorm that slammed through central Texas was the most costly hailstorm on record, some sources citing nearly $1.4 billion in damages. With near baseball-sized hail, the wild weather left a wake of thousands of claims within the city of San Antonio. Tile roofs were severely damaged, traditional metal roofs and bitumen roofs experienced classic signs of structural damage in the aftermath and thousands of claims were returned denied, as we’ve seen too often. From cosmetic exclusion to other technical reasons insurance companies use to justify a denial, many claims were mishandled during the event. Thankfully, our expert public adjusters utilized our access to engineers and appraisers to properly document structural damage. We worked alongside the adjusters, often recovering denied claims without major incident.

It’s true, there can be a lot of grey area within the insurance arena. It’s one of the reasons why hiring a public adjuster can be so important to the ease and overall success of your claim. A public adjuster ensures the best representation possible and provides an opportunity for a maximized settlement. Call one of ours at Strategic Claim Consultants at (844) 701-9995 today so we can review your claim and get you the settlement you deserve.