Does Insurance cover riots, Vandalism, and other Civil Commotion? 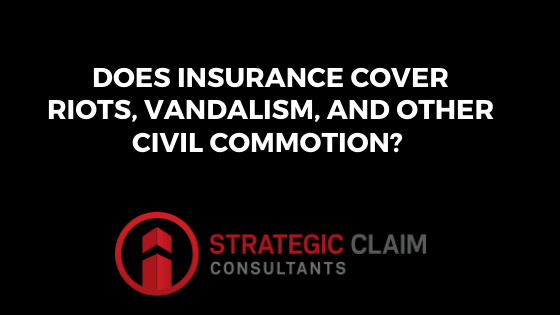 Businesses located in urban areas may suffer from damage to their property due to riots or vandalism. Many business owners are wondering “Does Insurance Cover Riots Vandalism or Civil Commotion?”   Read this article discussing this topic.  Listed below is an example of property damage caused by a riot.

Jeff owns Let’s Eat Cafe, located in downtown Atlanta. The restaurant building, owned by Jeff, and the property inside are covered by a commercial property policy which includes business income and extra expenses. The policy also covers damage caused by risks that are not specifically excluded.

One evening, some of the Atlanta residents decided to protest. The protest began peacefully, but as the day progressed into the night, riots began. These rioters began looting, vandalizing buildings, and caused damages to his restaurant. After finding this damage, Jeff reported the loss to his insurance company, and the insurance company’s adjuster arrived to conduct the assessment.  It took Jeff months to restore his property and get back into operation.

Riots, civil commotion, and vandalism are typically covered under most commercial property policies. These things are covered because the causes of loss are considered hazards and “all-risk” within the insurance policies. Insurance policies don’t exclude riot, civil commotion, or vandalism so any damages caused by these things should be covered. If rioters cause damage to the property, these items should be included within the building coverage insurance policy. The plates, glasses, furniture, tablecloths, food, and other damaged or stolen items should qualify for coverage under Jeff’s Business Property coverage.

Most insurance policies do not define riot, vandalism, or civil commotion. The legal definitions of each vary, but the general definition is a public disturbance involving violence committed by one or more individuals who are part of a group of at least three people. To establish a riot, people must act together to commit (or threaten to commit) destructive acts against other people or property. A civil commotion is similar to a riot but involves more people. It is a revolt by a large group of people in a public place. Riot and civil commotion can be challenging to distinguish, so the two are often listed together. Vandalism points to the deliberate damage of another party’s property.

Loss of Income and Extra Expense

Jeff’s restaurant suffered three months of lost income due to physical damage to the restaurant caused by the riot. This loss of income is typically covered by business income insurance. Jeff also incurred additional expenses to help his business recover the lost revenue due to the street being closed and disrupting the flow of traffic. Insurance that covers business income typically includes civil authority coverage. Civil authority insurance covers loss of income for a certain period of time, usually four weeks. The time covered under this type of insurance can be expanded by paying an additional premium.

Business income coverage is subject to a waiting period. This waiting period applies to lost income, including those under civil authority coverage, and doesn’t apply to extra expenses. The typical waiting period is 72 hours.

Business income coverage is a loss of income you bear due to a postponement of your services during the restoration period. When a waiting period applies, the restoration period begins 72 hours after the damages. In addition, lost income for the first three days of road closures is not covered. If you or someone you know finds yourself in this situation, we advise consulting with a public adjusting firm. A public adjuster works for you to help you

Strategic Claim Consultants is a public adjusting firm focused on helping businesses with their claims or potential insurance claims. Not sure where to start? Strategic Claim Consultants are here to help. As certified public adjusters with years of experience, we can help you get the compensation you deserve. Contact us now so that we can understand your needs and help plan the best course of action for your situation.