Puerto Rico Earthquake Update: Citizens demand the resignation of the governor after supplies were found in a warehouse from Hurricane Maria. 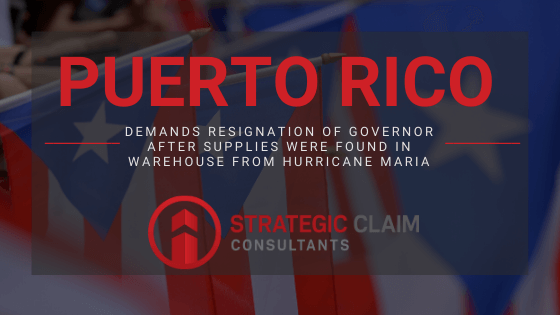 We have been on the ground helping residents and companies maximize their claims payout per their policy. Most Puerto Ricans were infuriated by insurance companies and government officials in how they handled claims and disaster recovery from Hurricane Maria. Unfortunately, Puerto Rico has suffered another blow, a major earthquake. Not only that, but the earthquake led to the discovery of forgotten disaster supplies.

Protestors gathered Monday at the governor’s mansion in Puerto Rico’s capital to demand the withdrawal of the U.S. territory’s governor and protest the recent discovery of apparently forgotten disaster supplies during the earthquake.

“We have to get rid of all the corrupt officials,“ said Mari Rivera, 33, a government employee, who noted that Governor Wanda Vázquez “needs to stop blaming others and show her face.” Protesters, in Puerto Rico, beat on pots, waved their island’s flag, and yelled in demand, ” “Wanda! Turn over the disaster supplies!”

Shortly after Governor Vázquez terminated two more upper ranking officials in her administration, the protest began. Housing Secretary Fernando Gil and Department of Family Secretary Glorimar Andujar were terminated due to paucity of information concerning supplies collection and centers for distributing these supplies. In addition to terminating, Gil and Andujar, Governor Vázquez, also fired emergency management director Carlos Acevedo. The lack of confidence was lost in these officials upon discovering a warehouse filled with disaster supplies from when Hurricane Maria hit Puerto Rico in September 2017. According to Governor Vázquez, she was not informed that these supplies were available, by the officials.

Governor Vázquez demanded that this incident be investigated and stated that those that broke into the warehouse to get the disaster supplies, would not be prosecuted.

The investigation was anticipated to be settled on Monday.

Strategic Claim Consultants is Puerto Rico’s premier public adjuster. We will always work on behalf and within the best interests of our clients. Our hearts go out to the people of Puerto Rico. If you are suffering a catastrophic loss from the recent earthquake, hiring a Public Adjuster is your best option to ensure you achieve your maximum settlement.